Every day, the leaves look a little more drab. Some birds look less dramatic than in spring, too, including Magnolia Warblers, who are now passing southward though the eastern half of the US. But even in their diminished glory a "Maggie" brightens up the Redbud tree. This one, with no stripes on the flanks, is a female in fall plumage. 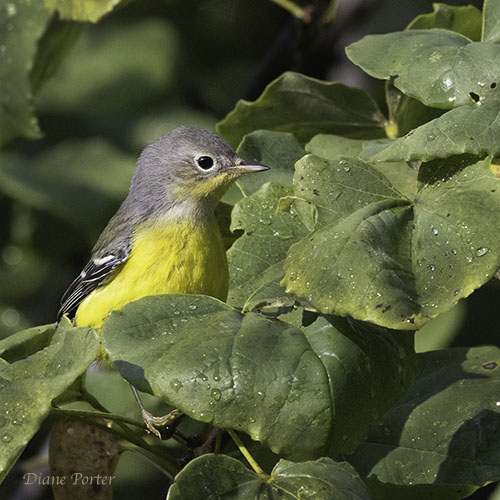 Magnolia Warblers nest to the north of Iowa and spend the winter to the south. For many birders, May and September are the times to watch for this lovely warbler.

There were two Magnolia Warblers hanging out in the Redbud. This other one is probably a male. (Click the photo for a larger image.) Although he has some blurry stripes on his underparts, they are a pale echo of what he wore in spring. That grey band around the throat is all that remains of what was a strikingly black collar in spring. 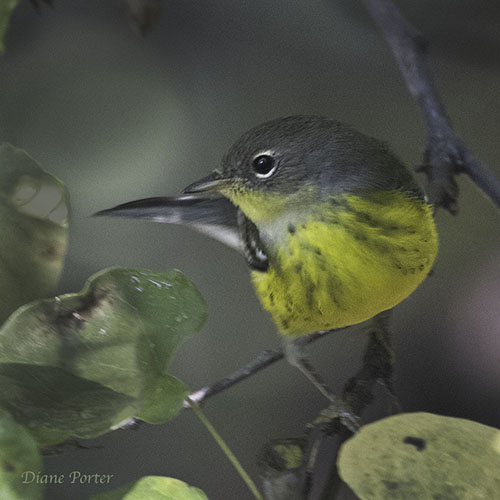 To prepare for the rigors of migration, the birds need to replace many of their feathers. They molt, shedding wornout feathers and growing new, fresh ones. Since the warblers won't be breeding on their wintering grounds, for the next few months their need will not be for flash but for concealment. So when they molt in late summer, they grow feathers that give them a more subtle look.

Then, as they prepare to return north next spring, they will undergo another molt and will grow yet another set of feathers that will carry the message of desireability. By the time I see the, next May, they'll have will have snazzy new outfits. Sharp stripes. Dramatic facial pattern.

Magnolia Warblers nest in the north and winter in Central America and the Caribbean. They must migrate as much as 2000 miles twice each year. Some of them pass through my back yard on both trips

This map by the Cornell Lab of Ornithology shows the winter range in blue, the breeding range in orange, and yellow for the areas where the species is seen in migration. (Click the map for bigger image, or visit the Cornell Lab's Magnolia Warbler) page. 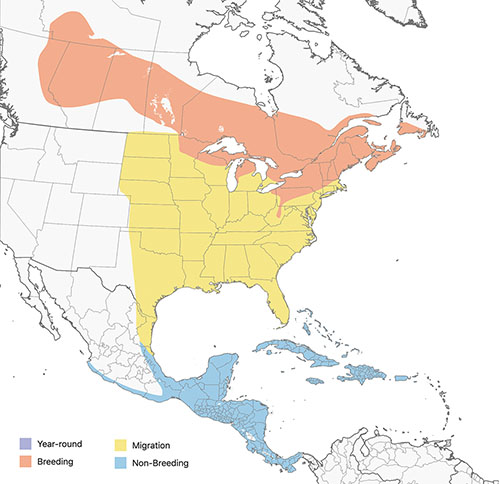 It's always a best day when I see a Magnolia Warbler.