Look for a Redpoll! 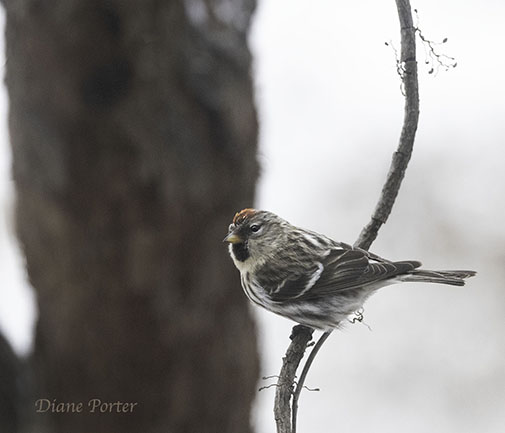 When the American Goldfinches flock through my woods, I spend a moment scanning them. A quick glance won't do. Have to look at them individually, one by one.

Lately I've found a few Common Redpolls among those goldfinches. It's a little burst of surprise and pleasure to spot one.

Of course, American Goldfinches are lovely to look at too, even in their winter drabs. But a redpoll! Now that's something special.

Although redpolls are not out of their range in Iowa, most of the birds spend their time farther north. Birders in Minnesotam Wisconsin, Washington state, and the northeast might see them any time. But occasionally a lot of them come south into the center of the United States to spend the winter. It happens when seeds, their usual winter food, are scarcer than normal. This pattern of coming south irregularly is called irruption.

When it does happen, which is about every other year, it happens all at once. This is why you might see no redpolls at all one winter, and then the next winter you're seeing them every day, and you hear many other reports. This January and February, 2022, it seems to be a good year for Common Redpolls in Iowa. I'm reading reports of folks seeing them all over the state.

The Cornell Lab of Ornithology produced this map of the range of Common Redpolls in North American. Orange is where the species nests. Blue is where they normally spend the winter, quite a ways south of their breeding range. Purple is where they live all year around. Turquoise is the winter range during irruption events.

What to look for 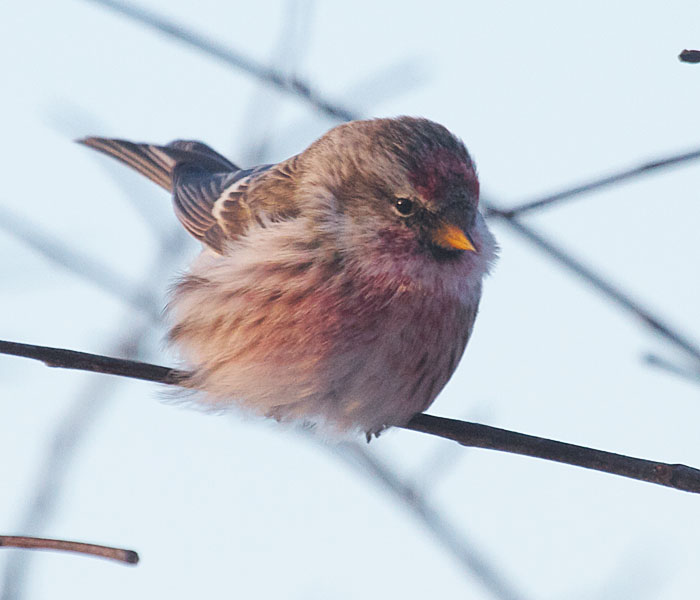 A Common Redpoll is a little bird of about the same size and shape of a goldfinches. It is not flashy, and it could easily escape a person's attention. That spot of red on the top of the head is a good field mark to look for, but it is sometimes subtle.

Also look for brown-striped back and flanks. And for the little black throat patch. Some of the birds also have a pretty pink front.

I wonder how many of Common Redpolls slip past people who aren't quite looking carefully. They're worth a second look.