One acorn at a time 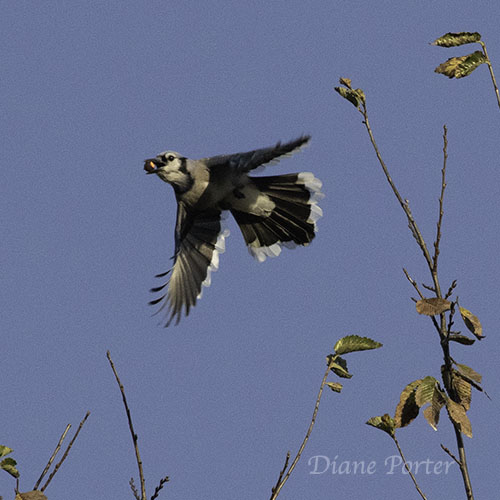 An acorn is on its way to a secret burial spot in the ground. It may be dug up this winter and eaten. Or it may be forgotten until it sprouts and becomes a new oak tree.

Blue Jays want to keep their treasures from other jays. So they often fly as much as a mile or even two.

A Blue Jay can carry five acorns at once. (Three fit in the gular pouch, one in the mouth, and one in the tip of the bill.) Then in winter, the Blue can dig them up and eat them whenever they want.

However, about half the time, jays forget where they've buried them. And you know what happen to forgotten acorns in the soil. They sprout!

Forest on the move

Ten thousand years ago, glaciers melted northward in the Americas as the Ice Age ended. What was once good oak habitat became unsuitable. And what had been too cold became just right. Blue Jays were on hand, providing transportation to a forest that needed to move.

It was slow progress, from our human perspective. The birds expanded the forest only a mile or two per year. But century after century the work went on, and new oak woodlands colonized the north.

I love to think about Blue Jays in this cosmic, long-view way. A small bird can move a mighty forest. I like thinking about how even the smallest parts of an ecosystem matter.