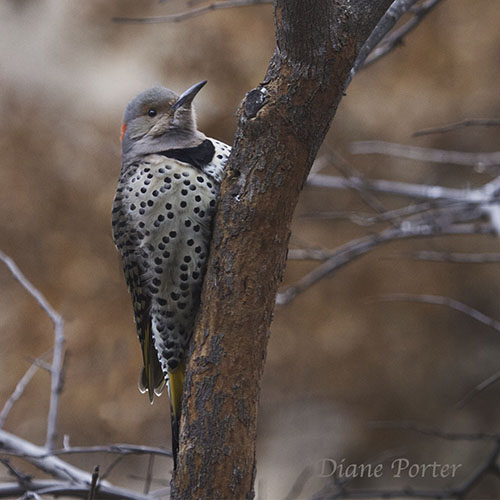 How nature half hides some of her beauty. Like the underside of the flicker's tail, a wink of molten gold. Its hard to see it when the bird is in repose.

It's like a fancy petticoat, designed to be alluring and yet demurely out of sight. It makes you want to look for it.

There's more gold hidden on this big woodpecker. Under the wings it's yellow also. Even in this photo you can see a bit of the yellow near the ends of the primary feathers. But only when the bird takes flight is the bright color fully on display.

I really liked those older names better. However, the two forms overlap along the east-west midline of the continent. Because the Red and the Yellow interbreed there, ornithologists decided the two were actually one species, not two. The Red-shafted and the Yellow-shafted were lumped into one species: Northern Flicker. 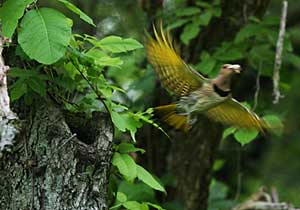 In flight, the yellow form of the Northern Flicker reveals its yellow underwing color. This flicker is a female, like the image at the top. This bird is carrying off a fecal sac produced from her young, which are still in their nest. You can see the opening to the nest, which is a fairly large hole in a tree.

The leaves are poison ivy. I don't suppose that does anything to protect the nest from raccoons, tree-climbing snakes, owls, or other predators. But it does make a pleasant decoration to the otherwise bare trunk of the tree. Maybe it provides a bit of camouflage.