Caloplaca on a bit of Bark 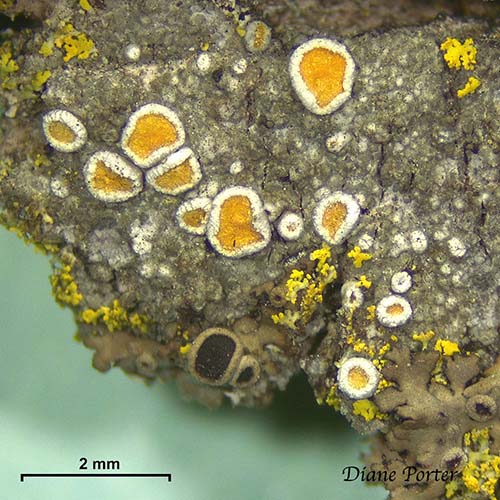 It was growing on the bark of a fallen deciduous tree in my woods. The bark came off easily in my hand. Even without my 8x loupe I coud see that it had several kinds of lichen growing on it.

I've never seen this lichen before, with eggyolk-yellow apothecia bordered with white rims. No thallus, or just the barest whitish grainy bits, which look more like rock crumbs, or salt.

First I tried to figure it on my own, using the dichotomous key in the great book, Lichens of North America, by Irwin Brodo. (It costs a fortune, but if you're interested in North American lichens you simply have to spring for it.)

For an utter amateur such as I am, with no training at all in lichenology, it is not easy to figure out most lichens from scratch. So I was pleased to get as far as the genus. Which is, I believe, Caloplaca.

But then I was stuck. I couldn't make my way though the section of the key that lets you separate out the species in Caloplaca. So I consulted people who know far more about lichens than I do. I posted the photo a Facebook page devoted to identifying lichens.

How small it is 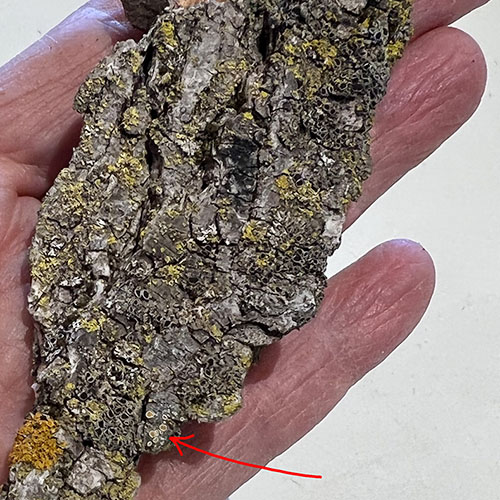 This is a tiny lichen. I only discovered it by looking at the bit of bark under the microscope at 8 power. Otherwise, I'd never have seen it. One speck is the only place I found it on the bark. In fact, this is the only place I've ever seen it at all. (Click the bark-in-hand if you want to see it a bit closer.)

Within the day, from the experts who offer their insights on the Faceboo page, I had four suggestions, all in the genus Caloplaca. (At least I'd gotten that part right, right?) The suggestions were:
C. cerina
C. ulmorum
C. holocarpa
C. stillicidiorum

I'll probably muse over those four possibilities a while. But at least I've gotten clearer on what makes a lichen belong to Caloplaca. 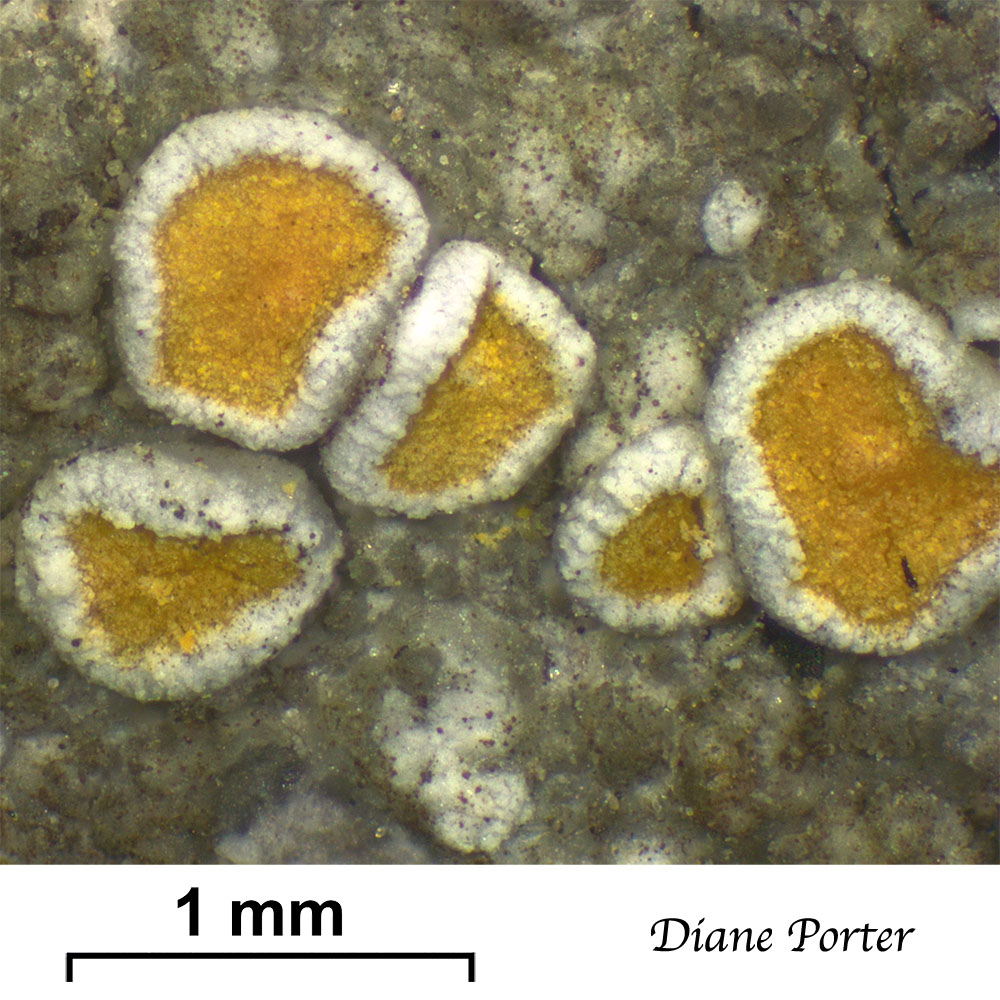 The apothecia of this lichen are egg-yolk yellow. I can't help thinking that they look good to eat. The apothecia are the fruiting bodies of the lichen. The pretty part, almost like flower blossoms.

I was struck by the conspicuous white border of the apothecia. This is what caught my attention as I looked through my microscope at the lichens growing on the piece of bark.

In many lichens, the thallus is obvious, often leafy or frilly, and sometimes colorful. This lichen, however, has a drab, gray, inconspicuous thallus. I wasn't sure at first if I was seeing a thallus at all, or just the underlying bark. However, that grungy gray background is indeerd the thallus. It is from there that  the apothecia emerge.

A lichen whose thallus is tightly attached to the substrate like this, or even buried within it, is classified as a crustose lichen. There is a huge number of crustose lichens. Lichenologists say they are the most difficult lichens to identify. They tend to be very small, so it's hard to see their features without magnification. And some of their characteristics are not visible to the casual observer. Some defining characters require chemical tests to determine.