Reminds me of donuts 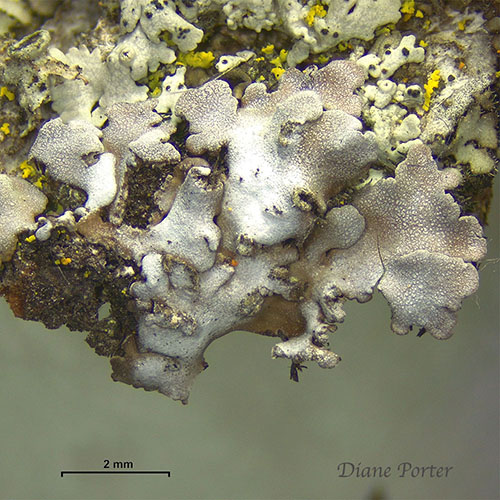 I've found this little lichen on the bark of twigs. It looks as if it has been sprinkled with powdered sugar. Like donuts.

It's called a Frost Lichen. Scientists prefer to use its scientific name of Physconia leucoleiptes.

Why it's a lichen

Lichens are not single species. Each lichen is a community of at least two different species, living together as partners. A fungus is always one of the partners.

A fungus does not make sugar through photosynthesis as most plants do. It has to get its energy from other source. The fungal partner of a lichen hooks up with something else, something that can perform photosynthesis. Inside of the body of the lichen there is at least one other completely different organism, with its own separate DNA. Often this other partner is a layer of algae. 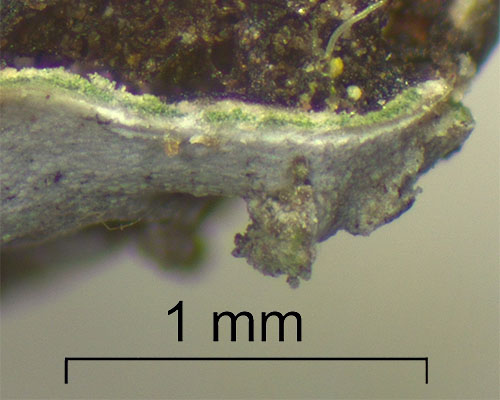 If you slice through a "leaf" of the Frost Lichen, you will see a thin layer of green tissue. That is the algal layer, and it is where the photosynthesis is happening. The algal layer has a technical term. It is called the photobiont.

That sugary appearance on the top is called pruinosity. It is made of tiny particles of calcium oxalate. I don't know how the pruinosity is generated and if it helps the lichen in some way. 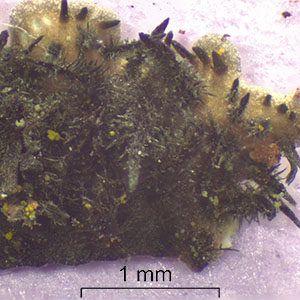 If you peel a bit of this lichen off the bark that it grows on, you will find a very different appearance. The Frost Lichen is brown on the bottom, with no trace of the pruinosity we see on the top.

But the bottom is pretty interesting. In fact, it is here that we find one of the characteristics that help us identify this lichen. Those little black spikes, which are called rhizines, are what the lichen uses to hold on to the bark.  In Frost Lichen, the rhizines are described as squarrose. Which means they are  shaped like bottle brushes.