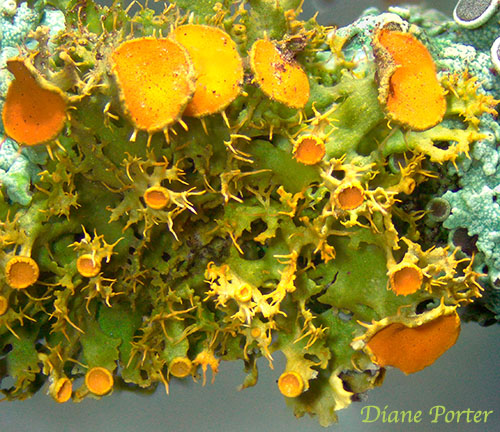 How I appreciate the way that big wind a couple nights back brought down treasures from up in the canopy. There was a tornado watch that night, and our family spent an hour in the basement, watching on our cell phones as the storm advanced and passed over us.

We were grateful the tornado did not materialize. The wind was enormous. And the next day, on the ground strewn with fallen limbs beneath the trees were about a million pencil-thin twigs.

Of course, the floor of the woods has millions of twigs like this. I crackle them underfoot all the time. But one of the twigs that morning after the storm happened to catch my attention.

It had a spot of gold in the center, no bigger than the stone in a ring. I picked it up and looked at it through my loupe. Gold-eye Lichen!

Unlike many lichens, which lie tight as carpeting against a branch, Gold-eye twists up tall, like a forest of miniature trees. The "trunks" are straplike. Sometimes they're green, though in dry weather they may be brown.

What grabbed my attention were the colorful, upfacing disks, all set about with golden tentacles, like the snakes of a Medusa.

The discs are are called apothecia. These are the reproductive structures of the lichen. The apothecia are only a couple of millimeters in diameter.

In the apothecia is where the even-smaller, microscopic spores are formed. The spores may float away on the breeze. If they land on a suitable branch they may become new Gold-eye Lichens. 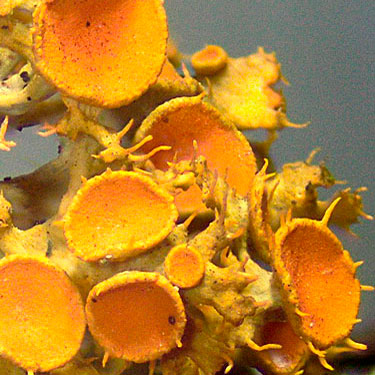 Even if you look at a closeup of the apothecia, you won't see the spores. They are much too small to see even at this magnification.

The scientific name of this lichen is Teloschistes chrysophthalmus. The first word, Teloschistes, is the name of the genus. Many related lichens share the first name of Teloschistes. To tell the truth, I don’t quite get the logic of the name, which seems to mean "split end"
telo = end
schistes = split
(I’d be glad to hear your theory on it, and you can email me if you have one.)