Could I eat it? 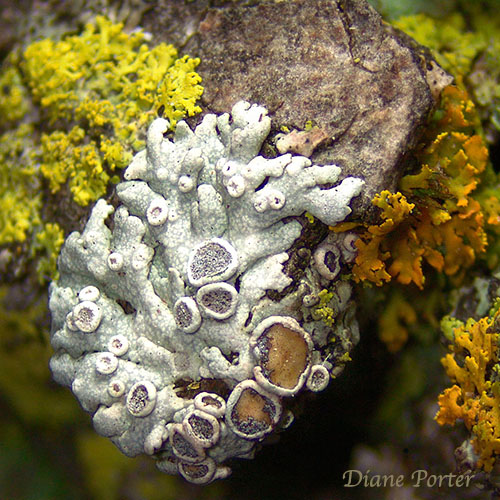 This white lichen looks to me like pasty dough, rolled out and lightly dusted with sugar. It is one of the "rosette" lichens, with the habit of spreading out in from a central point, like a rose blossom.

It's commly called Hoary Rosette Lichen or Gray Rosette Lichen. I like "Hoary" better, because it suggests the attractive whitish appearance. It sounds less drab than what "Gray."

This is the lichen I find most often in my woods. It covers almost every fallen twig and abounds on tree trunks. Often it is intimately mingled with other lichens. I think it makes pretty scenes.

Every lichen is a combination character. The main structure of its body is a fungus. Like other fungi, it has no chlorophyl and is incapable of photosynthesis. It must depend on plants with DNA to create its sugar and energy.

Lucky for the lichen, inside of its fungal body lives a completely different organism, with its own separate DNA, which can photosynthsize. In the case of lichens in the genus Physcia , that other entity is a kind of algae. The two separate species, fungus and algae, entwine and live together like a couple of teenagers in love, who just can't let each other out of their sight or they would simply die. 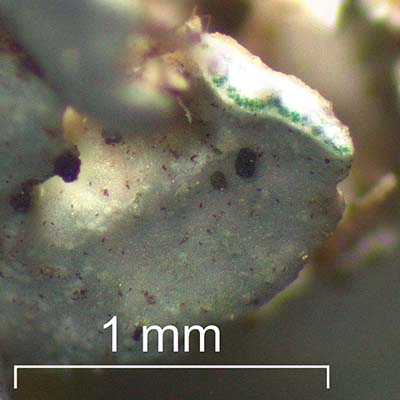 In Physcia lichens, you can actually see the algae inside the body of the fungus. It's a green layer. It is called the photobiont, which means the living part that utilizes sunlight. Without its photobiont, the fungus could not live. Nor could the alga live on the branch of the tree without the fungus to protect it from drying out.

When the lichen gets wet, the surface becomes somewhat transparent. You can see it happening, because suddenly the whitish lichen turns green. Sometimes a bright green. And now the algal layer receives light and can start photosynthesizing like mad. The fungus gets its share of the energy produced, and it can grow.

One of the ways to recognize Physcia lichens is by the little whitish specks in the surface. 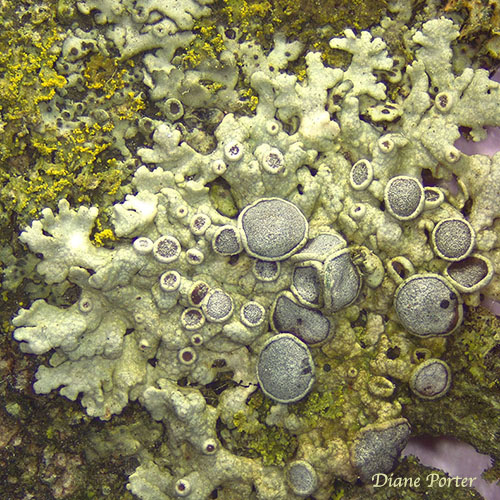 Those specks are little gaps in the layer of algae just below the surface. They're particularly conspicuous when the lichen is damp and has turned green, because they let you see where the algal gaps are.

The pale spots are called "maculae" (which means  "spots" in Latin). Maculae are a good clue that you're looking at a lichen in the genus Physcia. They are easier to see when the cortex is wet and green than when it's  dry and gray.‬

If someone has differing opinions on this lichen's identity, or more insight into the life history of the species, I'd love to hear from you. You can email me here.