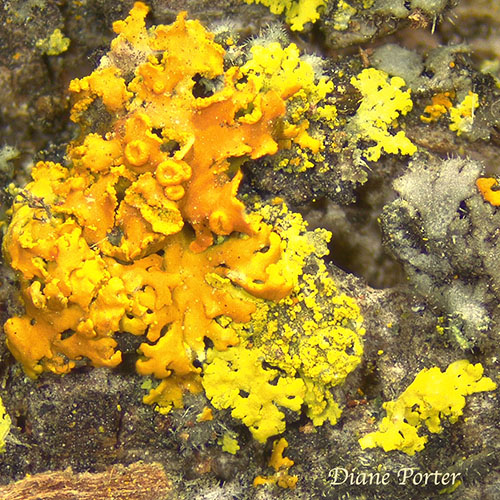 They are not related, but I often find them together on the bark of a small branch, intertwined like lovers. I'm not sure whether it's because they need each other or just that they like the same neighborhood and are trying to share a house.

The one dressed in orange is a Sunburst Lichen, and there are several species that go by that name. (We'll come back to them, down the page.)

The more purely yellow lichen, I think is Lacy Lemon. It has smaller lobes (the little fans at the outer border of the lichen), and the whole body of the lichen presses the bark more tightly than its companion. Its scienitfic name is Candelaria concolor. To remember it, I think of the yellow flame of a candle, and its color!

There are other lichens also on the branch. It seems as if I never find one species all alone. But the golden lichen lovers are getting all my attention today.

That darker yellow of the two lichens, the Sunburst, has a lot of close relatives. They all belong to the genus Xanthomendoza. They all look pretty much alike except to the most expert eye. It is a challenge to try to sort them out. 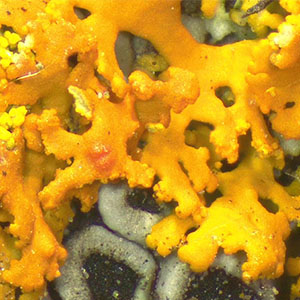 There are two candidates among the Xanthomendoza that have something peculiar about them, and that helps me narrow it down some. They have little orange bumps on their skin. Some lichnoligists compare the bumps to pimples. While that metaphor is memorable, I prefer to think of them as beauty marks. The two species of Xanthomendoza that share this characteristic are X. weberi and X. fulva.

Until recently, weberi and fulva were considered one and the same, but lichenologists have now split them into two. However, they look so much alike that many lichen enthusiasts decide which is which according to where the lichen is growing. It turns out that X. fulva is a more western species. X. weberi is the eastern form.

OK. Xanothomendoza weberi it is! And that is the species known to her friends as Bare-bottomed Sunburst Lichen.

I'm ready to be better informed

If someone has differing opinions on these lichens' identies, I'd love to hear them. You can email me here.