Gift of a twig 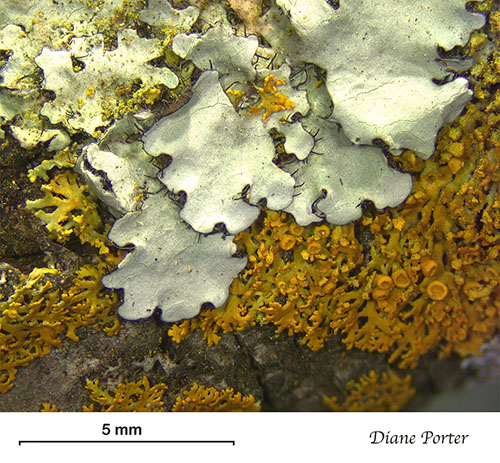 I picked up a little twig from under the trees. Every spot was covered solid with lichen. A wide , pale lichen appeared in just one small spot, an island among all the other lichens on the branch. It is called a Ruffle Lichen. For its ruffled hemline.

The top of that lichen is smooth like linoleum, but with cracks. The body of a lichen is called the thallus. In this Ruffle Lichen the thallus is flat, almost as if it had been cut from a paper. Or perhaps skin.

The scientific name of the genus that Ruffle Lichens belong to is called Parmotrema. I am still trying to work out the specific identify of this Ruffle Lichen. If I get it, I'll post it here. 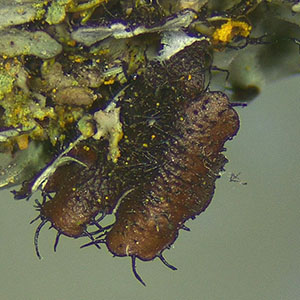 At least it does seem to belong to the genus Parmotrema. Parmotrema lichens have what look like eyelashes along the margins of the thallus. These eyelashes have a special name — cilia. They are not the same as the root-like rhizines that grow from the underside of the lichen and which help attach it to its substrate. The cilia look similar to rhizines, but they grow from the edge rather than from underneath.

I've never found an explanation for how cilia serve their lichens, but they must have an adaptive function. (If you know the answer and would like to tell me about it, please pop me an email.)

This Parmotrema lichen has rather impressive black cilia, which give the lichen a distinctive look.

The top layer of a lichen's thallus is often a different color from the underside. These color are also clues to a lichen's identity. This Ruffle Lichen has a dark underside. It's mostly black, but it's chestnut brown toward the edges.