Down in a low meadow while watching for bumblebees among the wild roses, I found a yellow flower that didn't go zing in my brain. It was Fringed Loosestrife, a native wildflower that is both pretty and inconspicuous.

Although it is sometimes said to be "aggressive" and capable of taking over too much real estate in some gardens, I've found it only twice on my land, with six years between the two occurences.

Interestingly, once was the Fourth of July and the other on July 6. I must have seen it other times, but apprarently it does not attract much attention when not in bloom.

I'm thinking that supposed aggressive tendency might be useful. In a space under a big old Pin Oak tree, the ground has been seriously aggressively colonized by Ground Ivy. Now that is a non-native plant that is not only aggressive but downright invasive. It is a native of Eurasia, and it competes with our native plants. So if this little wildflower will compete with that stuff and cover the ground, I'll say thank you very much!

Its very own bee

Small as it is, this flower is an important life support to bees, moths, and other native insects. It is supposed to have its own bee, Macropis steironematis. This species specializes in plants in the Lysimachia genus, which Fringed Loosestrife belongs to.

Insects that specialize like this  are described as oligophageous. They are poster children for biodivdersity. I don't know whether that bee actually lives here. I haven't seen it on any list of Iowa insects. But now that I know what it has a taste for, and that Fringed Loosestrife lives here, I'll know where to keep an eye open.

If you want to try to grow Fringed Loosestrife, you'll want to plant it in a fairly wet location. It is OK in sun or shade or a mixture. The two places I've found it were low meadows where the soil enjoys runoff from surrounding hills. It was not under trees, but it gets quite a bit of shade from the tall grasses and forbs that live around it.

Names of this flower

Common name:
Fringed Loosestrife
The name comes from the fine hairs on the petioles (the little stalks that go to the individual leaves). These give the plant a fringey look. 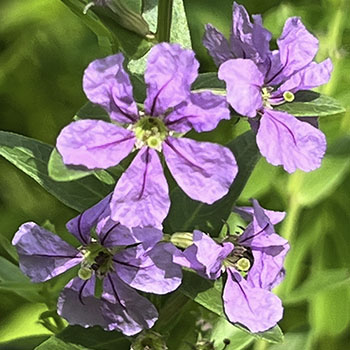 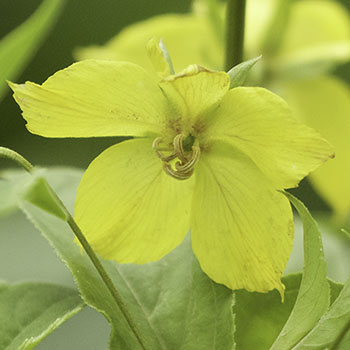 Scientific name:
Lysimachia ciliata
Although Fringed Loosestrife (the 5-petaled yellow one) has the same common "surname" as does Winged Loosestrife (the 6-petaled purplish one), the two flowers are not close relatives. They are not in the same genus. However, they do like to live in similar damp, sunny locations.

Where does Fringed Loosestrife grow? 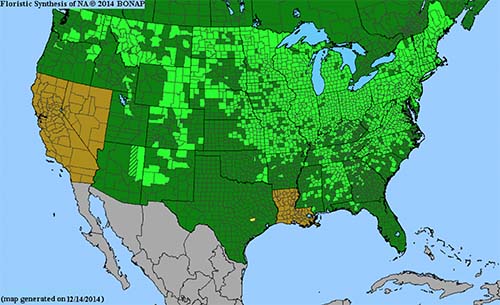 Fringed Loosestrife is a native wildflower of North America. It is somewhat more prevalent in the north and the east.. In Iowa it is not rare, but it's not found in every county.