My history with Jacob

May is coming on coolly. But today, May 2, the Jacob's Ladder opened its first blooms.

We have a history, this wildflower and I.

Four years ago, I found it, under the outleafing trees alongside Crow Creek. It was a small plant with only three flower stalks.

It is not a flashy plant. You could overlook it. In fact, I didn’t find it until I started seriously looking for spring ephemerals in the woods. And I didn’t even know what it was that morning when I first found it.

However, I wanted to make sure I could find it again. I pulled away the Creeping Charlie that was choking it, and I put three stakes around it so we wouldn’t trample it by accident.

The next spring it came back bigger. It had turned into a robust plant, as lovely for its symmetrical leaves as for its lavender-blue  blossoms. 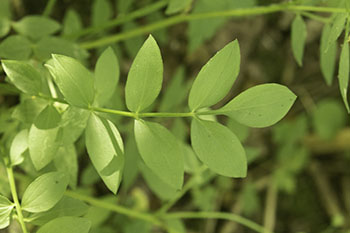 The name is whimsical. Some think the paired leaves resemble the rungs of a ladder. But why Jacob’s?

Maybe someone named it for a Bible story because the plant inspired a feeling of reverence.

Suddenly I had to have Jacob's Ladder in my shade garden. I visited that first plant every day for weeks so that I would make sure to be able to gather seeds. I'd often missed the moment to gather seeds on other flower discoveries, and this time I wanted to get it right. 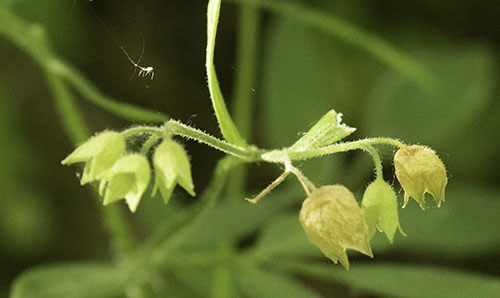 When the seeds formed at last, they looked as if wrapped in little paper lanterns. The first few got away from me before I could catch them. So I covered a cluster of flowers with an organza bag, and when the seeds suddenly dropped, I had them.

I planted the seeds in a small pot. The pot spent the winter outdoors, protected from rodents in my growing box. I figured that I didn't know how much moisture or how long a cold period would be needed to break dormancy and allow the seeds to sprout, so I let nature decide. The growing box has a mesh lid that lets rain and snow through, but mice, rabbits, and deer are excluded. And those darling chipmunks who so love to dig up my seeds and plants. 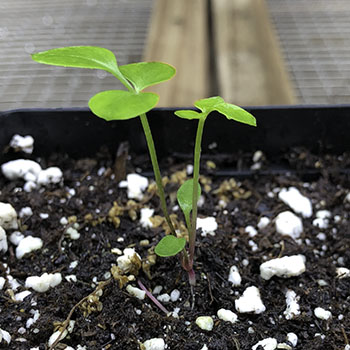 The next spring, the first seedlings emerged. The seedlings have triplets leaves. Eventually each stem will have the pairs of leaves mentioned above, evenly next to each other, with a central and symmetrical leaf at the tip

I separated my baby Jacobs into individual pots. After letting them get a good start, I planted them out in several semi-shady spots, to see where they would do well.

They are blooming all over the place now. The best bunch is where they are blooming with refined exuberance under the redbud tree. But they are also doing well on the shady side of the house. They bloom later there, and that extends the time I get to enjoy them.

They're not so deeply hued as Virginia Bluebell, nor quite so early. And maybe they're not dramatic But there is something refreshing about the daintiness of this small beauty. Something graceful in the curves of its vines and the way the pale blue bells flop loosely from the slender stalks. . Scientific name: Polemonium reptans

And of course gardeners adore them. It's great that they bloom before almost any other flower. But the way they return year after year is soul satisfying. The clumps come back stronger and thicker every year.

Where does it grow?

Jacob's Ladder is a spring ephemeral, blooming in the woods before the trees leaf out.

The map shows the native range of Jacob's Ladder. The light green color shows counties where it is found growing wild. This map was produced by The Biota of North America Program (BONAP).

Even if you are outside the limits of the green counties, you have a good chance of succeeding with Jacob's Ladder, providing you're not in a terribly hot area.