The Ant and the Trillium

The ant on the counter

Last night I found a big black ant rushing across my kitchen counter. Tightly clenched in its jaws was a Prairie Trillium seed, which was attached to a cream-colored swoop. The ant kept darting under the edges of objects. I tried to get it into view so I could get a picture. But the ant was too quick and agile for me. 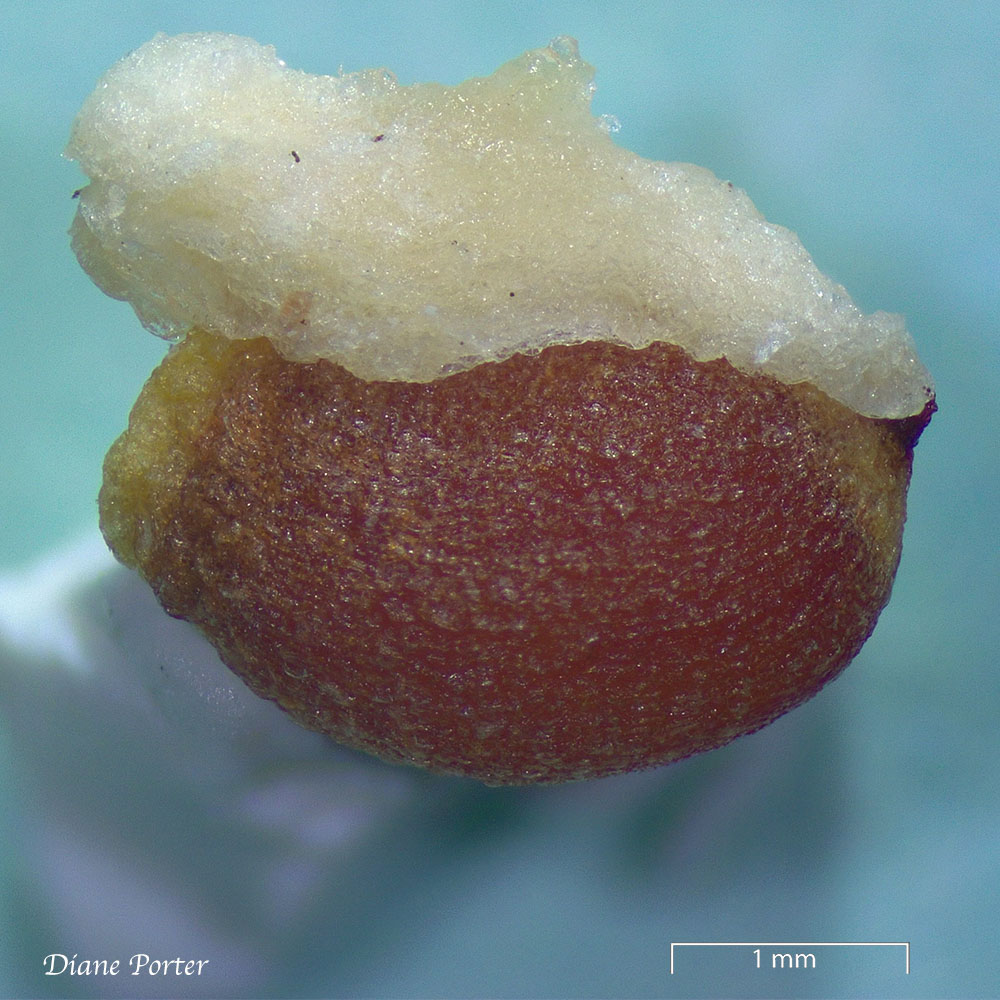 I prodded at the seed with a toothpick, but the ant would not let go. We battled this way for a minute. I tried not to harm the ant, but clearly I was causing it aggravation. Ultmately it dropped the seed and disappeared into a crack at the edge of the sink. At least now I could study the seed. (Click the picture for bigger version.)

That creamy swoop. I'd seen that kind of thing before, on Bloodroot seeds that I collected last spring. It's something extra that some flowers grow on the outside of their seeds — an edible substance made of fats, proteins, or sugar.

Ants carry the the swoop-plus-seed to their nest, peel off the swoop, and feed it to their babies. Then they throw away the seed.

Which is exactly what the plant is hoping will happen.

Ants are tidy creatures, highly responsible about taking out the garbage. When they discard the seed, it ends up in a perfect spot for germination. Often it's mixed with ant excrement and other organic byproducts. Yum —fertilizer! Possibly the spot is damp, which is a plus for sprouting. And it's likely to be in an underground chamber, where birds won't get it.

Prairie Trillium makes its flowers in the woods in early spring, before the trees leaf out. Each plant makes just one flower, and all the seeds for the year come from it. The seeds are precious. So Trilliums pay ants to plant them. 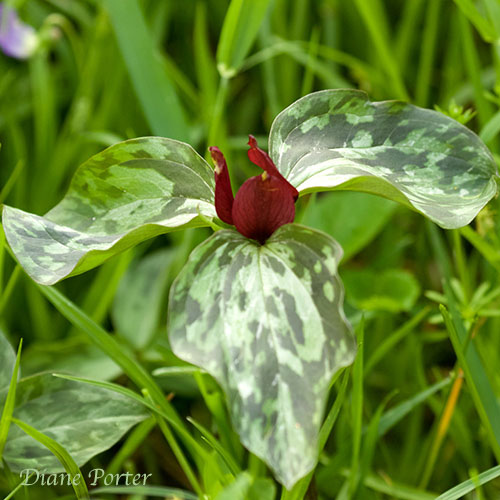 Where the ant found the seed

I collect seeds of native plants on my land, to increase the species and preserve their unique, local characteristics. So I watched the Trilliums and waited. The flowers lasted for many weeks before fading. Seed pods formed and slowly swelled. At last they looked ready. One of the pods was starting to detach from its base.

In the photo below, the six-gored, yellowish thing that looks like a squash is the seed pod, which formed in the space between the three petals. It appeared after the Trillium flower was past. 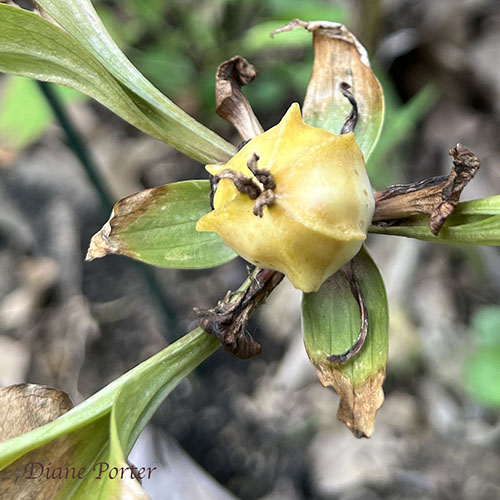 I touched the pod, and it came away in my hand. It was damp and soft. I was afraid it had rotted, which would mean no seeds. Disappointed, I took the pod in the house and set it on the kitchen counter. I figured that after it dried out perhaps at least I could still discover something about its structure.

I poked at a seed pod and mushed it open. It had about a dozen seeds inside. The seeds looked firm, unlike the rotten pod that still held them. 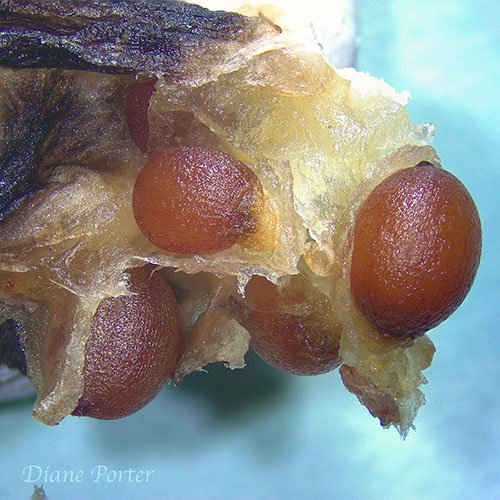 When I teased out a seed, I saw that it had that special, attached swoop curving around one side of the seed. It was whitish and gooey looking, as if it might have been made from rubber cement.

I wasn't expecting it, and I got kind of excited. I may have shouted at Michael, something to the effect of "Oh my God, this Trillium seed has an eliaosome!" Like it was worthy of headlines or I'd discovered America.

I left the pod on the counter to dry out some more. And later that evening is when I discovered the big black ant making off with one of the seeds. The ant had extracted the seed from the pod. How did it ever find it in the first place?

Elaiosome. That extra bit on the seed. It means "food body." Food is for ants. Its only purpose is to attract ants and get the ants to plant the seed in a favorable location.

Diaspore. The seed together with its elaiosome attached is called a diaspore. It is two things together, some genetic material and a method of dispersal,

Myrmecochory. This kind of propagation by ants has its own term. It's called myrmecochory ("murr-meh-COCK-ery"). Myrmecochory is a strategy used by a small number of plants. They are not all close relatives. Botanists think that numerous ancestral lines of plants have hit independently on the idea of getting ants to do their planting for them. Nice word.

Trillium seeds take a long time to germinate. Before a Trillium seed sprouts, usually it needs to go through a winter, a summer, and then another winter. Two years after the parent Trillium bloomed, the seed may germinate.

And then, once a Trillium seed has at last sprouted, the seedling takes up to ten years to mature and bloom. This is because the plants have only a short time to photosynthesize, grow, flower, and produce seeds. 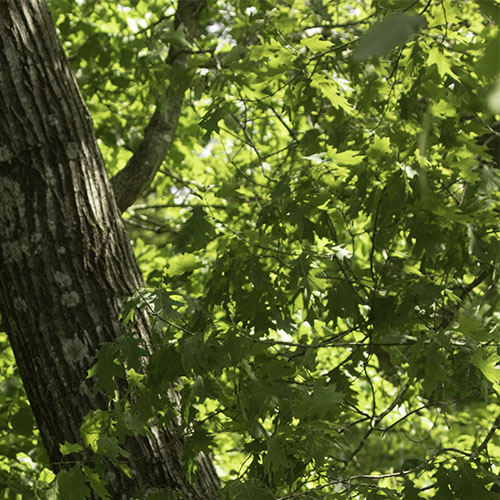 They have to get it all done while sunlight can reach them through the still-sleeping trees. Soon the leaves will close the sky to direct sunlight. Then it will be game over until next year for flowers on the forest floor.

For the first few years after germination, Trillium plants have only one leaf. Eventually they make three leaves, and after that they may create flowers.

As I see it, there are three ways to get more Trillium plants from seeds.

Method 1:
Let the ants have the seeds where they fall, and let new plants come up where they may. This is what I'm "doing" with the seeds that I left to nature and the ants in my garden. I have to acknowlege that I've never found a baby Trillium. Maybe I overlook them. Or maybe most of them don't make it. Possibly it's a long shot for a seed to turn into a blooming Trillium.

Method 2:
Plant the seeds outdoors, but put them where they have a clear route to the open air, and protect them from animals who might eat them or dig them up. These should sprout in two years. 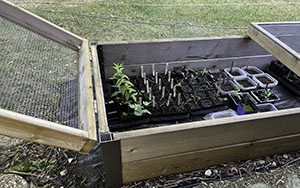 Chimpunks are capricious and merciless. They may not eat Trilliums, but they sure will dig them up. Just because. So I'll protect my baby Trilliums in my growing boxes, where I keep other seedlings. The box is outdoors and open to weather, rain, and snow. But the bottom is protected with agricultural fabric, and the top is covered with 1/4-inch metal hardware cloth that animals cannot chew through.

Method 3:
Provide two artificial winters and an intervening artifical summer. Prairie Moon Nursery, which is my go-to source for information on growing native plants from seed, does not describe the germination requirements for this species. However, for Large-flowered Trillium they recommend three artificial seasons of 60-90 days each. I'm going to assume the same timeline applies to Prairie Trillium. In order to have the seeds ready by next spring, I'll give the seeds three artificial seasons each 75 days. 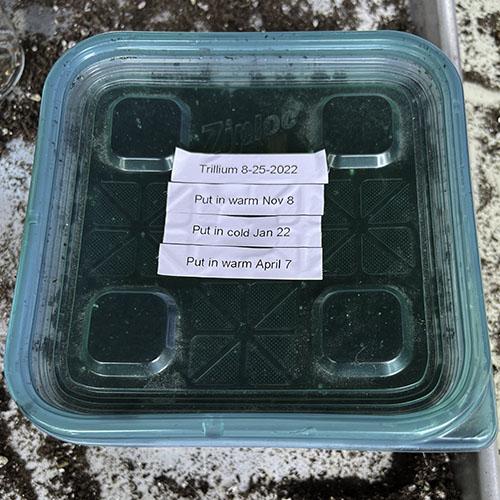 I hope by April 7, 2023, the seeds will be ready to sprout. If they do, I could have "my own" Prairie Trilliums a year earlier than normal. I'll be watching for a small plant with only one leaf.

The names of this wildflower

Where and when does Prairie Trillium grow?

Prairie Trillium lives in Midwestern woodlands, especially in the dappled sunlight of deciduous woodlands. It emerges very early in spring and blooms before the trees wake up. This way, the plant gets to make us of the spring sunlight still coming through the bare branches. 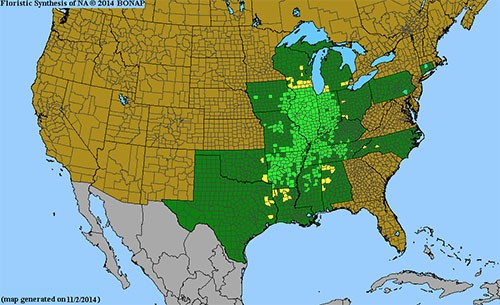 The map shows the native range of Prairie Trillium. The light green color shows counties where it is found growing wild. This map was produced by The Biota of North America Program (BONAP).