A tale of two Lobelias

Here are a Great Blue Lobelia (Lobelia siphilitica), with its blue blossoms, and a Cardinal Flower (L. cardinalis), with its red blossoms. They are separate species, but they're relatives, both members of the Lobelia genus. The flowers are about the same size and are similar in form, with three drooping lower petals and two upper petals.

The upper petals are fairly erect in the blue species and somewhat floppier in the red species.

In both species, reproduction takes place in a structure that comes out of the center of the flower. This long narrow structure ends in five stamens (male elements) that are fused together to form a tube. Lobelia reproductive strategy is unusual. The pollen is concealed inside the staminal tube, and down inside the fused stamens are the female elements. No individual flower can pollinate itself, because it provides pollen before it is ready to accept pollen. It has to be pollinated by a different flower.

Whoa! Then how do Lobelias get pollinated?

Sex in the Great Blue Lobelia

When the Great Blue Lobelia flower opens, it starts out acting the male role, which is to say it provides pollen. In the photo below, the staminal tube hooks in from the left, above the lower petals.

Through a microscope, you can see that the staminal tube has a sort of brush at the end. The brush is made of whitish hairs that emerge from the ends of the tube. 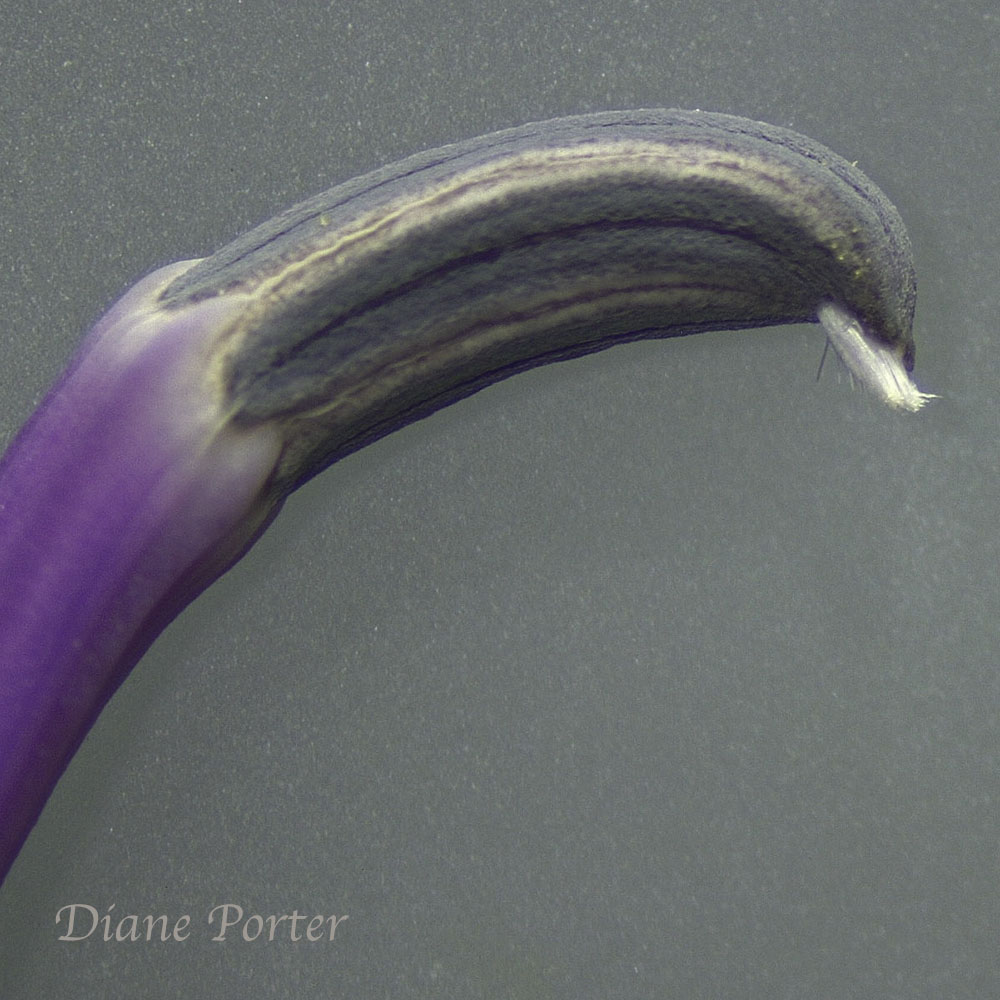 I noticed that when I bumped my finger into that little brush, my finger came away with a tiny yellow dot. Through a microscope, the dot looked like yellow powder — pollen! It seemed as if the brush functioned as a trigger. When bumped, it released pollen from inside the tube. And when I squeezed the tube, quite a lot of pollen gushed out. 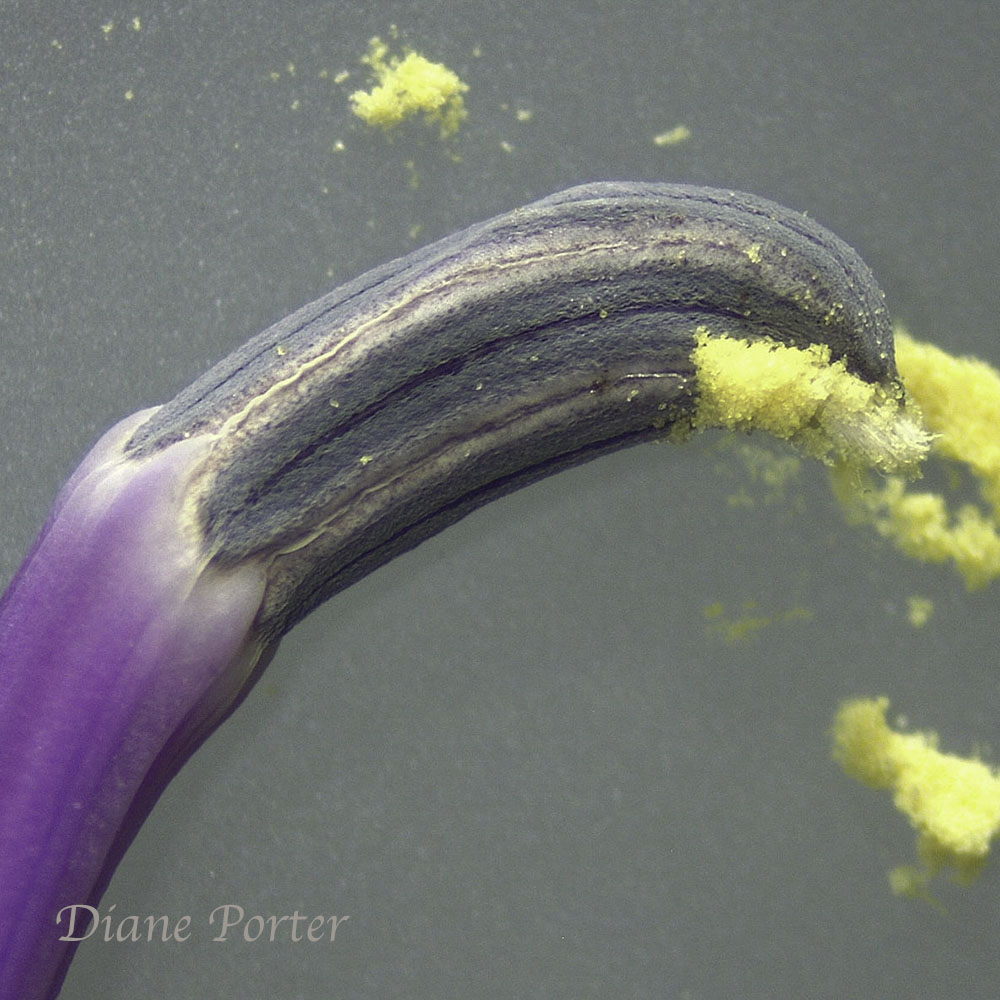 After a few days, pollen no longer comes out of the staminal tube. Instead, the style and stigma (the female parts) emerge right out of the center of the tube. In the photo below, the style is the greenish tube. At the end of the style, the stigma is a two-part, sticky, pinkish area to which pollen can easily adhere. You can still see the whitish brush, but it no longer triggers a release of pollen. (Click the photo to see an enlarged image.)

Along comes a bumble bee, looking for nectar in the flower of a Great Blue Lobelia. The end of staminal tube is peeking from the space between the two upper petals. 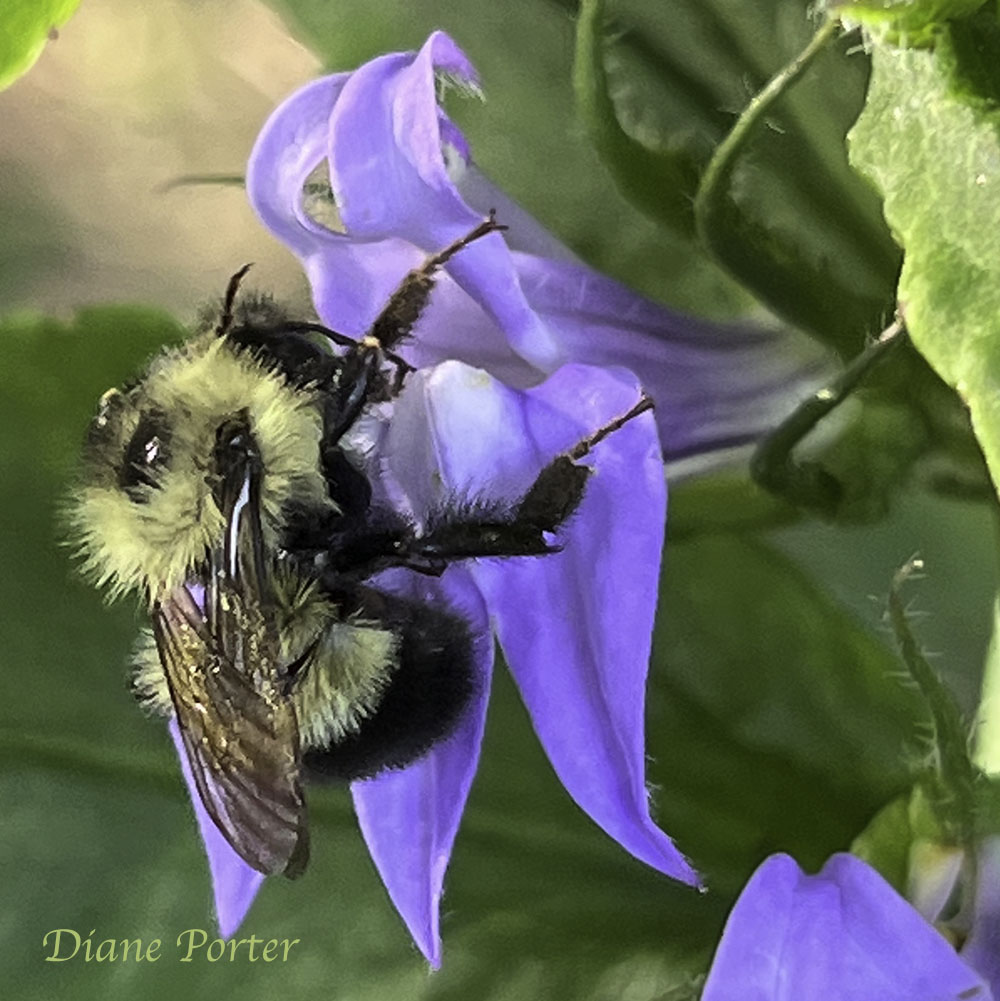 When the bee clambers into the corolla of the flower, the two upper petals spread apart, and the staminal tube reaches down and touches the bee's back. If the blossom is in male phase, it will deposit a dose of pollen on the bee. If the next blossom the bee visits is in female phase, the stigma will touch the bee right where it’s carrying the pollen. The pollen will transfer to the stigma. Bingo! Pollination done! 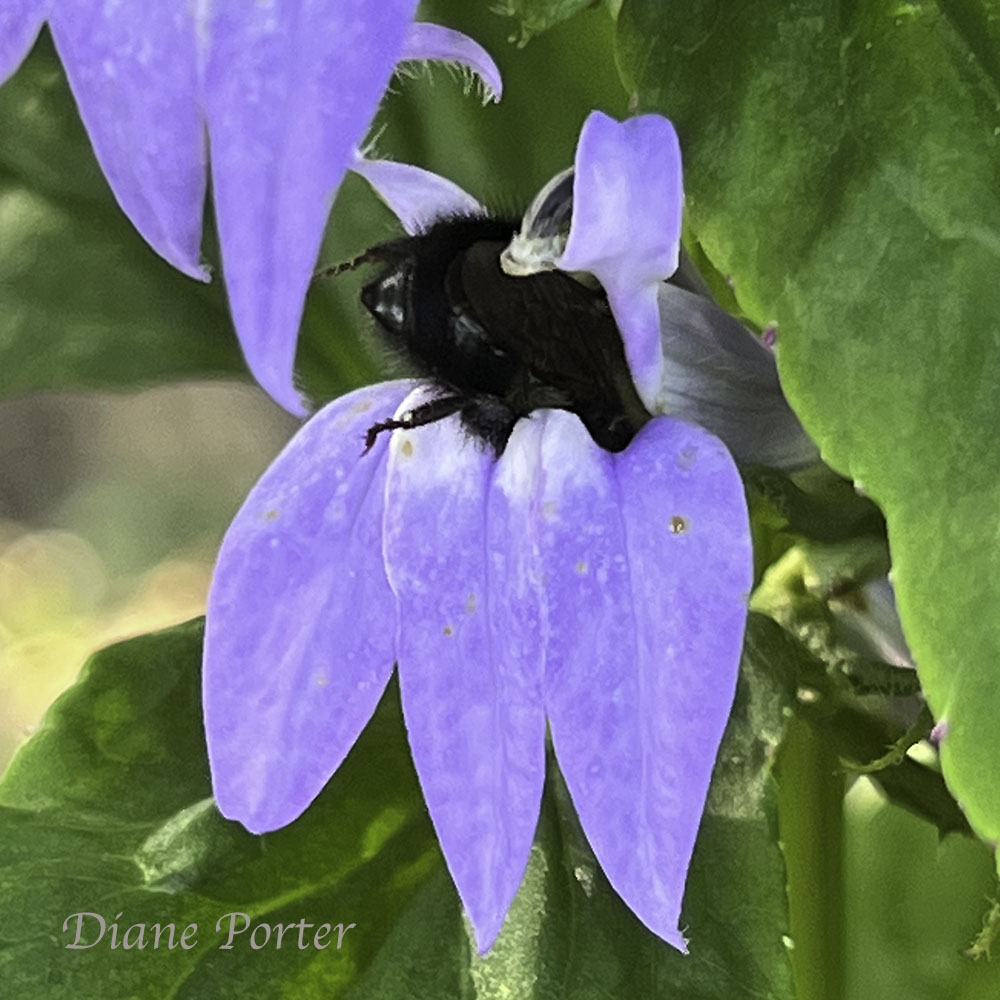 Meanwhile, unaware that it is being used, the bee sips some nectar and flies away happy.

The Cardinal Flower has a similar structure and goes through the same phases. The blossom is in male phase for the first few days. Then it stops producing pollen and enters its female phase.

The reproductive tube is much longer in the Cardinal Flower than it is in the Great Blue Lobelia. It holds the staminal tube out, away from the petals. A bee could not pollinate a Cardinal Flower. Its short body would not make contact with the brush or the stigma. Cardinal Flowers are pollinated not by bees but by hummingbirds.

In Cardinal Flower the stigma is bright magenta. I think of this as the Hot Lips phase. Like that of Great Blue Lobelia, the stigma is a bit sticky. 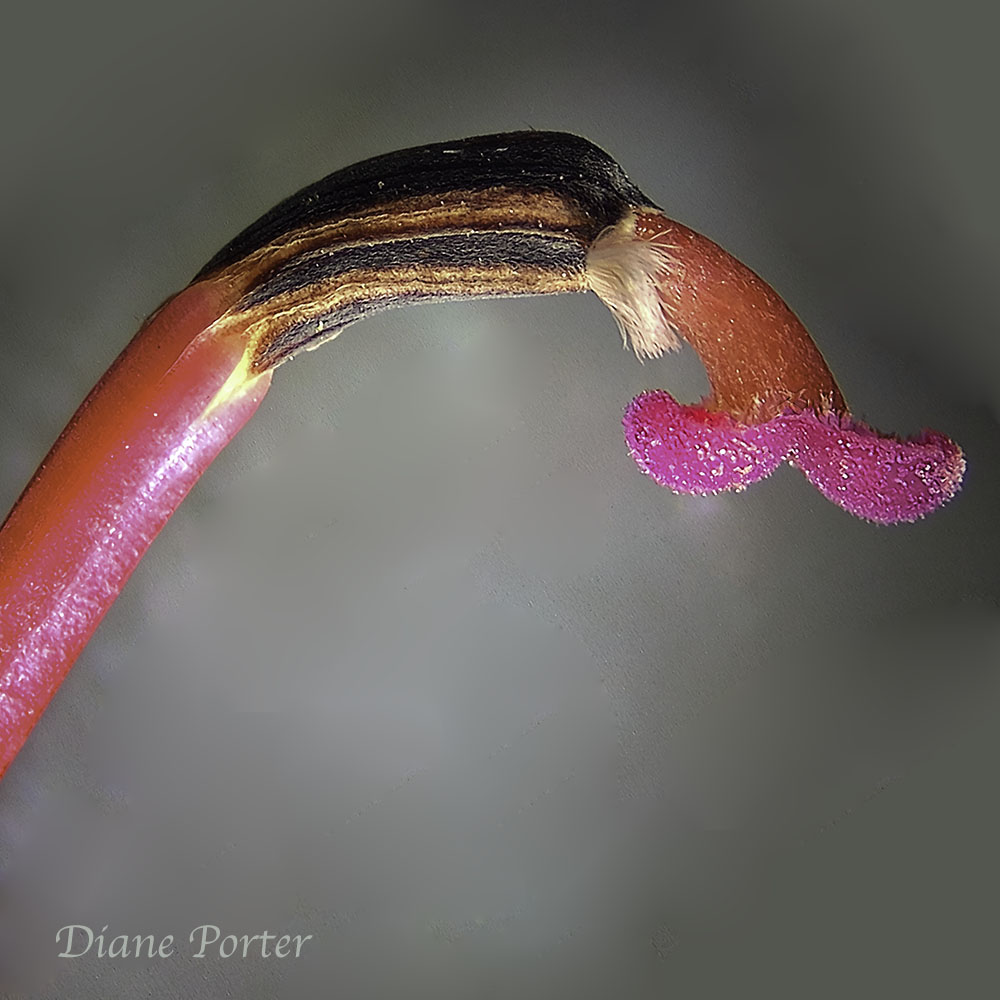 Here a Ruby-throated Hummingbird contacts a Cardinal Flower that is in its male phase. The brush of the staminal tube is in exactly the right place to trigger the release of a few grains of pollen onto the hummingbird's head. (Click the photo to see an enlarged image.) 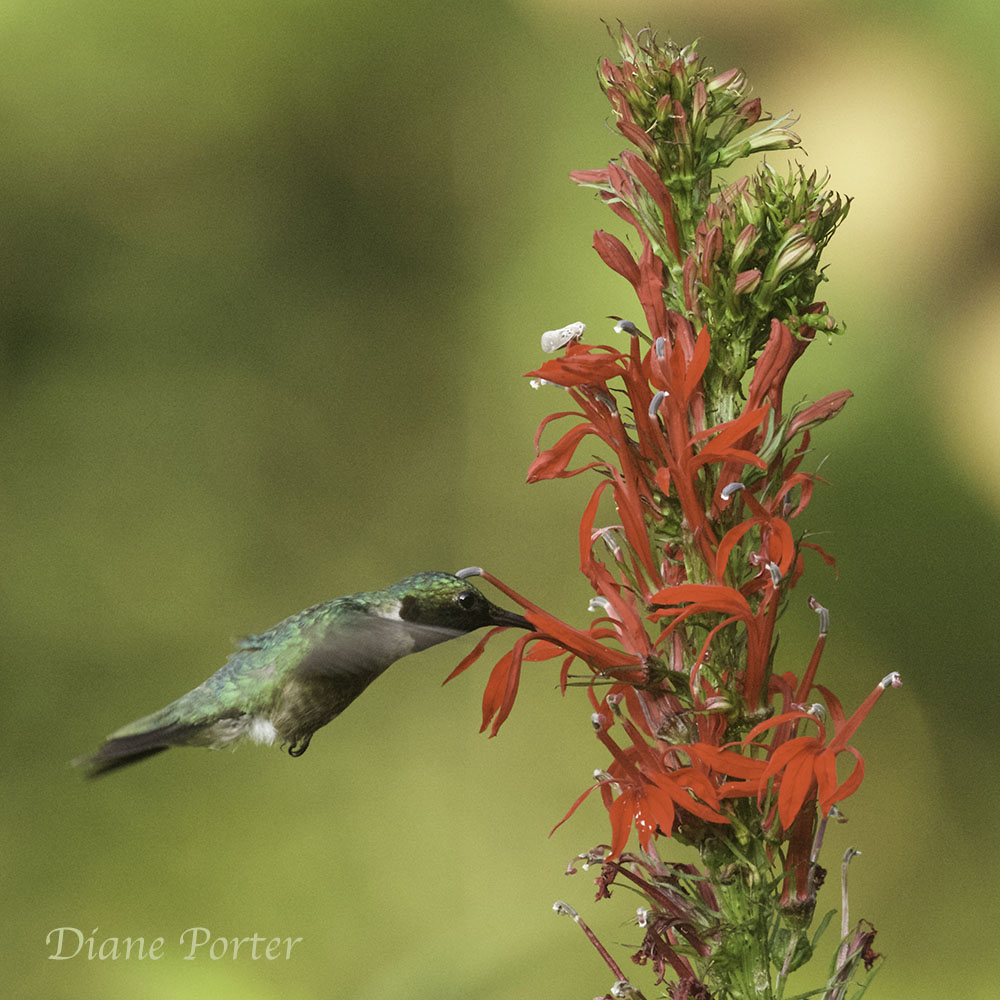 If the next flower the hummingbird visits happens to be a Cardinal Flower in its female phase, the bird will give up the pollen to the flower and cause pollination. Here you can see the stigma giving the hummingbird a kiss right where the Hot Lips stigma will pick up any pollen that may be on the bird's head. (Click the photo to see an enlarged image.) 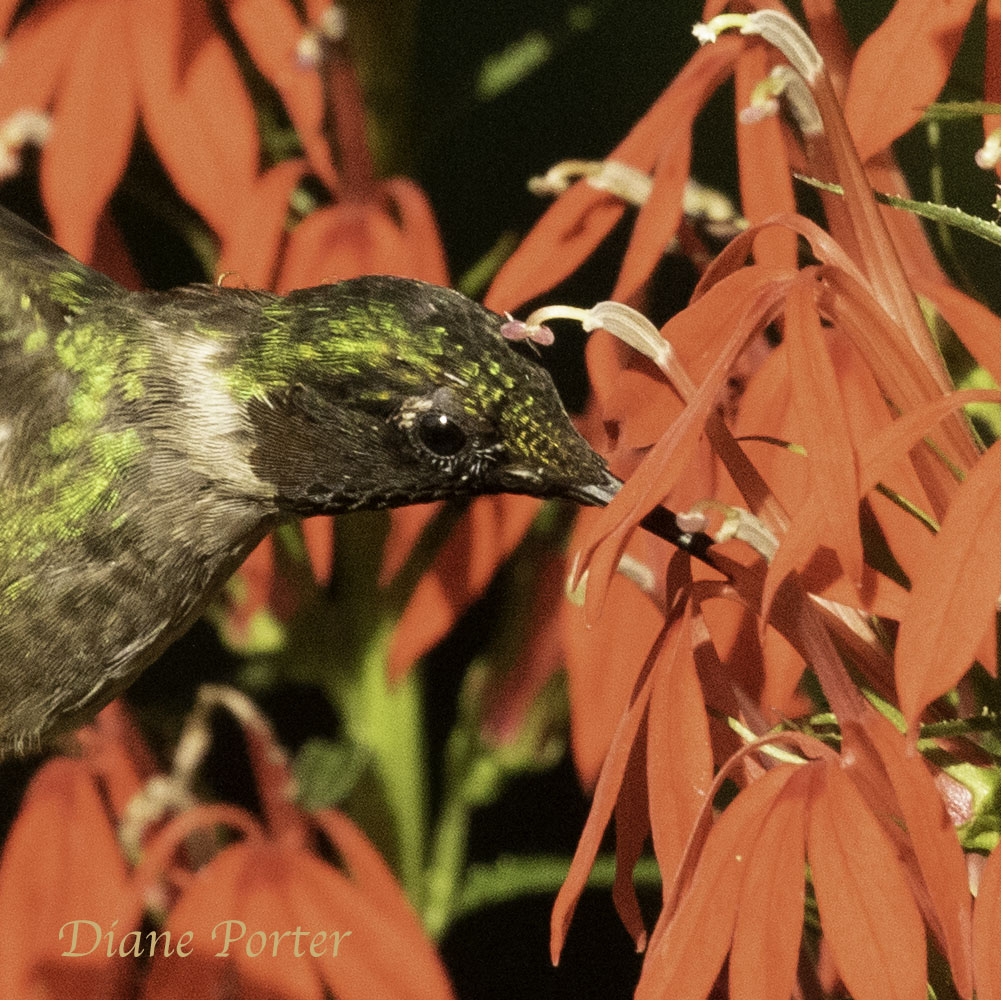 Seldom the twain shall meet

Because bumble bees pollinate Great Blue Lobelias and hummingbirds pollinate Cardinal Flowers, the pollen from one species does not usually get onto the other. As a result, the two species remain reproductively isolated from each other, even though they may grow close together.

However, if the pollen from one did find the stigma of the other, there is nothing barring the two plants from cross pollinating. I have heard that although it is a rare event, it does sometimes happen in nature. When it does, the result of the cross is supposed to be a Lobelia with purple flowers.

Once I learned that such a thing was possible, I just had to try to make it happen in my own back yard.

In my garden, Cardinal Flowers start blooming several weeks before Great Blue Lobelias, but they overlap a little. Because each flower is male before it is female, the earliest opportunity to make a cross was to put "blue" pollen onto "red."

I selected a budding side stalk of Cardinal Flower. To keep hummingbirds from beating me to the female flowers, I enclosed the stalk in an organza drawstring bag. (These are sold inexpensively on the Internet to hold wedding favors.)

I waited until some of the the Cardinal Flower blossoms went through their male phase and entered their female phase. When the Hot Lips appeared, I picked a male-phase Great Blue Lobelia blossom, squeezed its staminal tube, and caught some pollen on my thumbnail. I removed the bag and touched the pollen to the Cardinal Flowers' stigmas.

I tied a soft white ribbon around the pedicel of each flower I'd pollinated in order to identify them later. After the pollination, I replaced the organza bag on the stalk to prevent further pollination. In the next photo, two of the lower flowers have white ribbons. 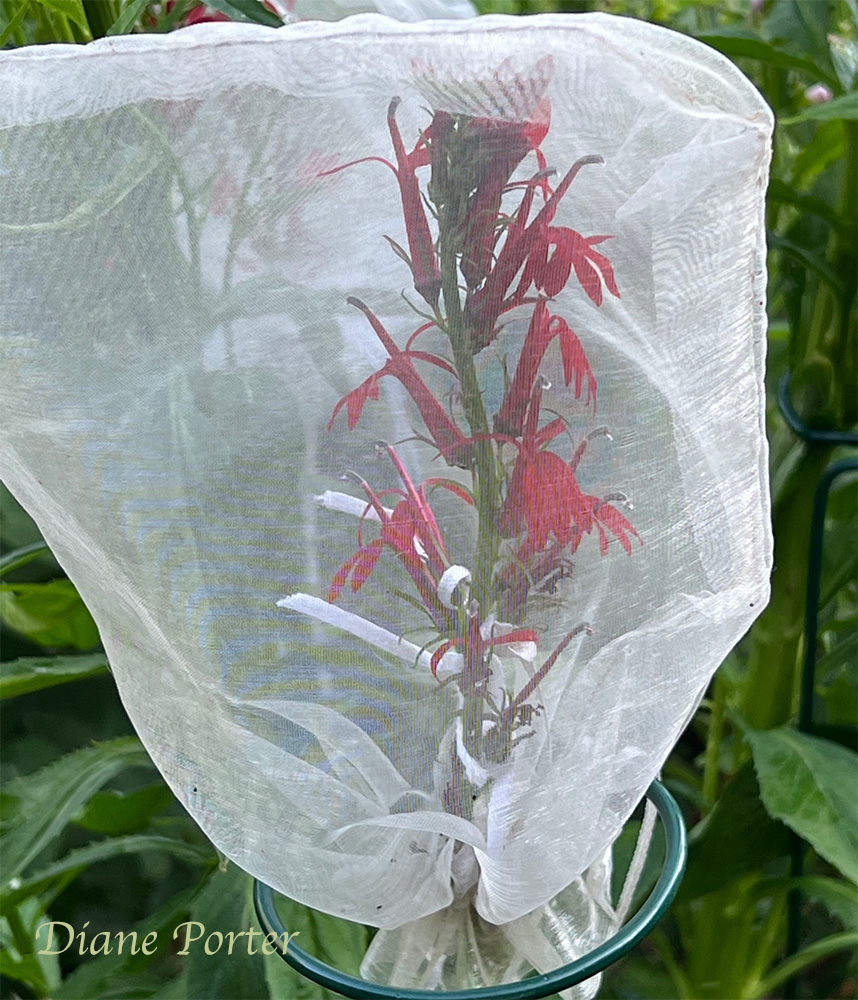 I was concerned that pollen could fall from the later-opening upper blossoms and contaminate the flowers I'd just pollinated. I considered pinching off the upper flowers. However, the stalks ooze a white sap when severed, and I didn't to want chance harming the plants. And to tell the truth I couldn't bring myself to cut off the pretty flowers. I decided to gamble that at least some of my pollination would work.

When the seed capsules were ripe, I collected the fine-as-dust seeds. The following spring, I cold stratified the seeds and grew out a few plants. Nine of them survived being moved into my garden. As expected of pernennial plants, none of them bloomed that first year. Various mishaps with weather and animals left only a single plant alive by the following year.

I watched it hopefully as the stalk elongated and formed buds. At long last the lone surviving plant from my Lobelia cross was in bloom. And...

It had purple flowers. 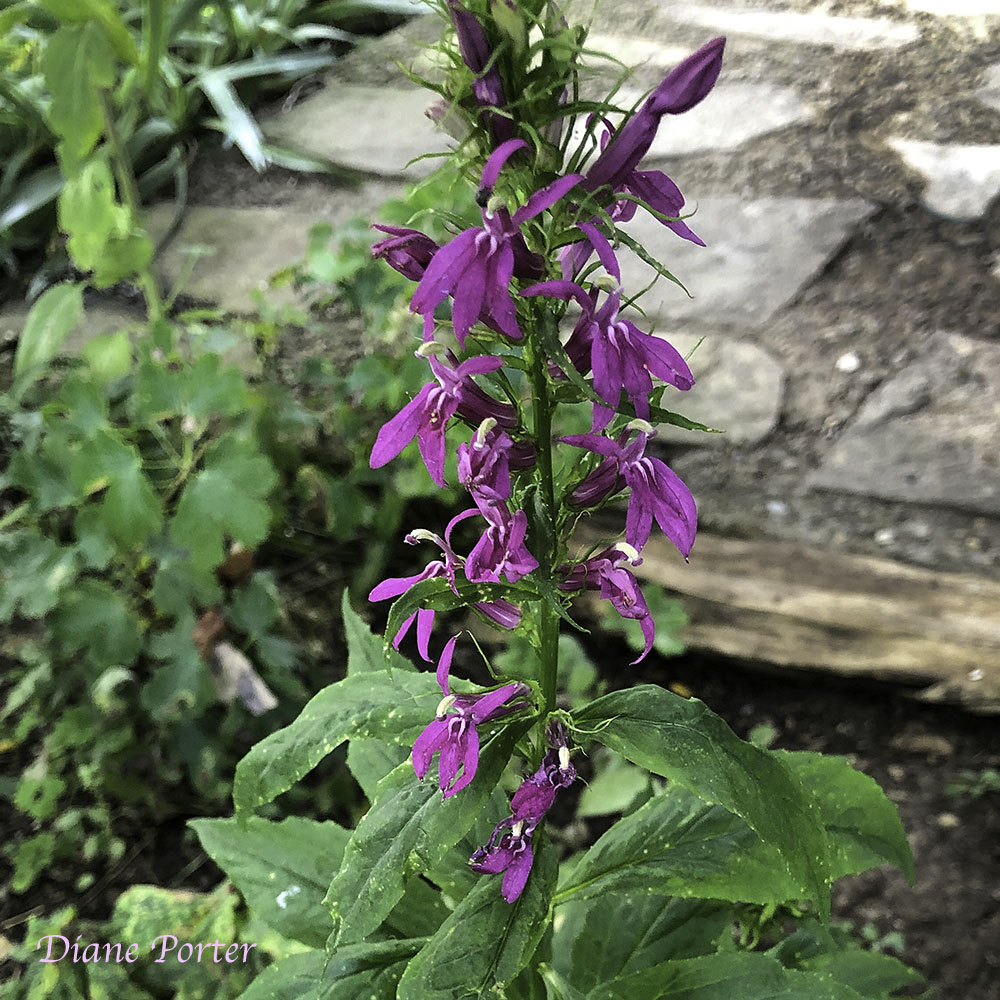