A new anemone for me 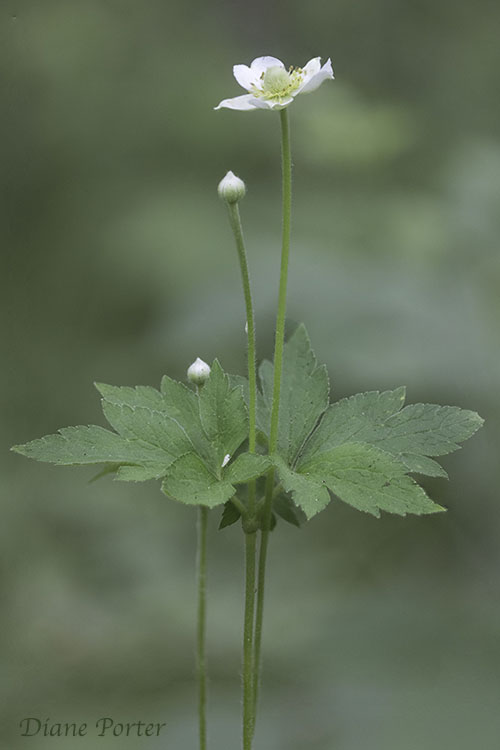 Last October, I found a few plants that had gone to seed, and I didn't recognize the leaves. It took me a while to figure out that it was a Tall Thimbleweed, a native wildflower of the Midwest.

It's also called Tall Anemone. I can see the family affiliation. The blossom does resemble other anemones, with its elegantly simple sepals and prominent central structure.

This spring I searched that area several times, hoping to find the plants in bloom. Without success.

However, for the first time I did find Tall Anemone in some woods closer to my house. Day by day I watched the leaves unfold and the stems shoot up. Then white globular buds formed. And at last now the plants have bloomed.

They seem charming, with their lonely singleton blossoms balanced on long-necked stems. As if to stay above the Poison Ivy that crowds around their feet. The leaves also have a graceful appearance.

A thimble of seeds

When I first found this plant, along a wooded trail near a small stream, the flowers were long gone. The leaves had grown coarse and rather dark. I didn't know what flower had bloomed there. I didn't even know whether the plant was a native or an invasive alien.

On top of the tall stems were seedheads unlike anything I'd seen before. They were long cylinders, rather like a fuzzy thimble.

I picked one seedhead, leaving the other eight to disperse naturally, and brought it home to identify it. Under the microscope, I saw that the seeds fit deeply into the "thimble." They were covered with what looked like a golden mane.

With super-sharp tweezers, I could pull out the seeds one by one. Each one was snuggled in its own golden fuzzy blanket. I couldn't get the fuzz off to look at the seed inside. So I separated out the seeds and put them in my 2021 seed collection. 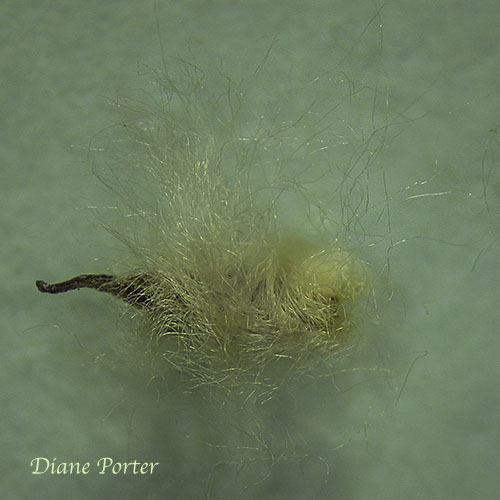 I read up on the how to start Tall Thimbleweed from seed. (My favorite source for this sort of information is Prairie Moon Nursery.) Thimbleweed seeds require 60 days of cold stratification before they'll germinate. So I saved the seed until late winter and then put it in damp seed-starting mix in the fridge for two months.

Their stint of damp coldness accomplished, I took them out of the fridge and put them in an outdoor growing box, where they continued to experience early spring weather and precipitation.

The box is open to weather but is protected by a hardware-cloth lid, which keeps out mammalian troublemakers. Otherwise the ever-adorable chipmunks would dig up every little pot and unearth every seed and small plant. But that is another story. 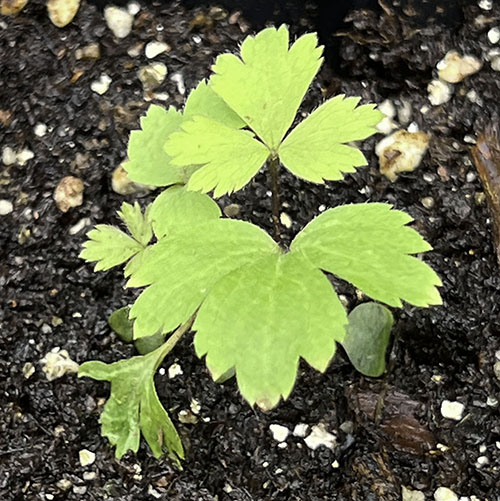 My 2021 Tall Thimbleweeds are still growing in the protected outdoor box in late June of 2022. Every other week I treat them to a half-strength solution of fish emulsion to keep them growing. I'll wait until the cruel heat of summer and drought are over before settling them into permanent locations.

They would not bloom this year anyway, even if they were in the ground. Tall Thimbleweed is a perennial. The first year is devoted to building roots and a sturdy plant. Perhaps they will bloom next year, or the year after.

Because they like shade, or at least partial shade, I'll plant them under the big Pin Oak tree near our house. That way I can enjoy them year after year. I hope they'll establish a permanent colony there.

Where does Tall Thimbleweed grow? 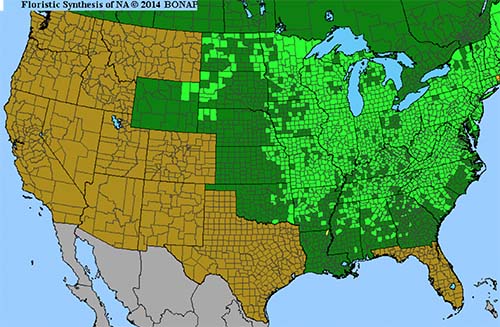 Tall Thimbleweed is a native wildflower of eastern North America. It is primarily a plant of the northeast. In Iowa it's not found in every county.

Names of the Tall Thimbleweed 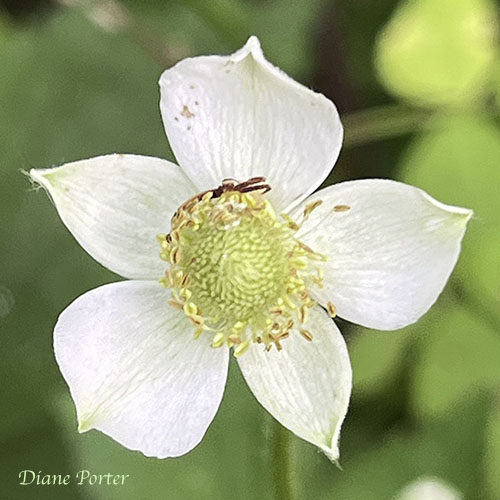