Why do you hang your head? 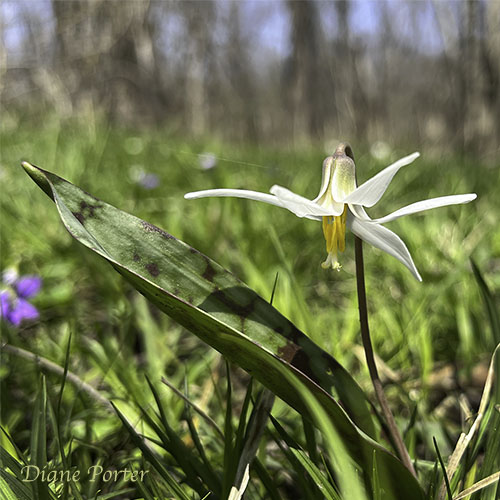 Five friends wandered through a green oxbow of Crow Creek — three human and two canine. The younger dog, Lily, splashed at speed through the water. The older, Latte, watched from the banks.

I found one open White Trout Lily. This flower is fair of face, but to look it in the eye one has to lie down, cheek against the moist ground, close as lovers sharing a pillow.

Why it faces downward is a mystery to me. Perhaps its beauty is intended for some ground-dwelling insect to pollinate it. If you know the reason, I'd be glad to receive your thoughts by email.

Names of the lily

White Trout Lily is almost a lily. At least, it belongs to the lily family. It goes by several other common names as well, and not all of them reveal its genealogy. Some people call it Dog's Tooth Violet, though it is by no means a violet. Others say Adder's Tongue, a name I can only describe as inexcusable. I've also heard it called White Fawnlily. Trout Lily is the only one of these names I understand. The leaves are spotted in a way that reminds me of the trout my father used to catch in the rivers of California's Sierra Nevada mountains.

My botany friends tend to call it by its scientific name, Erythronium albiduman. Strangely enough, the name "erythronium" comes from a word meaning red! In Greek, eruthrós was chosen for some red flowers that grow in Europe and Asia. Our American trout lily is a close relative, and the entire genus is labeled with that name, despite the fact that our White Trout Lily has white petals and no red anywhere.

How it makes its living 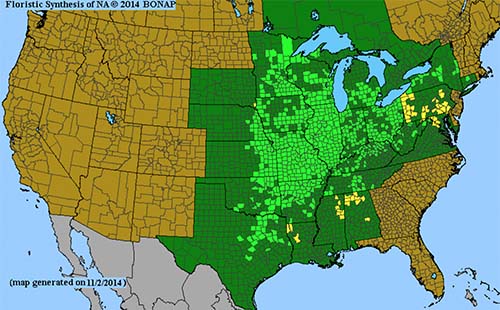 The White Trout Lily is a spring ephemeral, blooming before the trees leaf out and claim all the sunlight. It grows in a huge area that covers much of the Midwest and south central US.

The map shows the native range of Erythronium albiduman. The light green color shows counties where it is found growing wild. (Never mind the dark green. It means only that the species is found somewhere in the state.) This map was produced by The Biota of North America Program (BONAP).