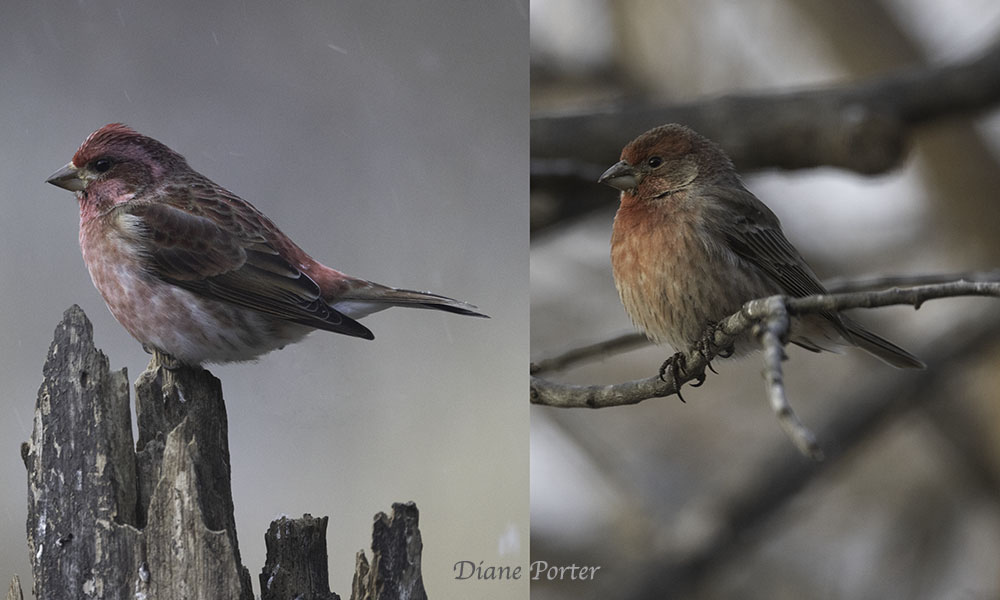 With apologies to those who already know all about our red finches...

Folks call these both red, but a male Purple Finch wears more raspberry-colored decorations, while the male House Finch's red tends mo re toward the orange. Caution, though — their colors vary and can fool us sometimes. It's worth taking an extra moment to look at some other details.

Purple is more puffy headed, often with a hint of a crest on top. House's head is more rounded and often looks smaller.

It's a bit hard to see here, but Purple's tail is notched, while the House's is cut straight across at the end.

Purple is more softly striped on the flanks. House has finer, sharper brown streaks there.

The top mandible of the Purple Finch's bill is straight. That of House Finch is a little curved, rounded down along the upper edge.

A Purple Finch has a stronger facial pattern. Often you can see a broad, fairly distinct purply stripe above the eye. But sometimes the House Finch shows a pretty strong stripe, so you can't absolutely go by that.

As is often the case in identifying birds, we can't rely on one single field mark. Consider them together. Soon we develop an instant recognition of a species, so that we know it without even thinking about it. This is identifying by gestalt. That ability comes with many experiences of looking at each field mark carefully.

These points are only for males. Females are another story, to be told another day. They're actually easier to distinguish than the males!